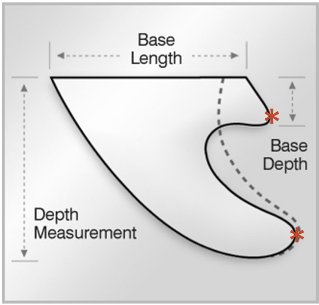 The objective behind the C-Drive Fins concept was to produce a fin that delivered a noticeable performance upgrade to a traditional fin application.

By optimizing the surface area of the fin at the junction where the surfboard, the fins and surface of the the water interact, C-Drive Fins give the surfer greater capacity to generate forward motion (speed). By moving the surface area away from the tip and mid section of the fin and into the base, the unique design allows the surfer to execute sharper turns and to retain greater control.

We believe that C-Drive Fins' unique design is perfectly balanced for the performance requirements of todays modern surfer, and ideally suited to many of the modern surfboards on offer.

Our extensive R&D taught us a number of important aspects about our design and about fin design in general. When a surfboard is in motion there are essentially three key forces in play.

Our R&D team set out to optimize the interplay between the fins, the surfboard and the waters surface. As with most designs, there is not just one attribute, but rather a combination of attributes that complete a design. Some of the key aspects of C-Drive Fins are detailed below.

The Cut Away  - This is arguably the defining feature of the C-Drive Fin concept. It has allowed us to maximize drive and manoeuvrability simultaneously.   It is the attribute that is integrally formed between the trailing edge of the tip of the fin and the trailing edge of the sectional area that forms part of the base (marked by the two asterisks). The Cut Away has a significant impact on the performance of the fin through its effect on the flex pattern, base depth and tip area. We believe it to be the most advanced feature in recent fin design and certainly a departure from the traditional fin profile. The dotted line on the fin diagram above illustrates a traditional fin trailing edge. You can see where we have redistributed considerable area away from the tip and mid section and used it to create the base.

Base Length  -  Refers to the length of the fin as it comes in contact with the bottom of the board.  You may also know that it is commonly accepted within the surfing community that the longer the base a fin has, the more drive it will generate.  We found that if the base length was too short we didn’t achieve the resluts we were looking for.  Likewise, if we extended the base too much the board had a tendency to track.  Our testing determined the optimum base length for each fin size. Take a look at our Fin Dimensions on the Sizing Guide page and you will notice that C-Drive fins are longer in the base than they are deep.

Tip Area  - The redistribution of surface area away from the tip and mid section of the fin into the base where it is more effectively applied, is a key component in the equation that gave us both drive and manoeuvrability together. In order to maintain the overall surface area (size) of our fins relative to a standard fin application, we understood that as we increased the base area we also needed to decrease the area within the tip and mid section, finding the right balance has produced the results we were searching for.

Base Depth  -  C-Drive Fins are unique in that when we refer to the depth of the fin we need to consider two aspects of the design. Firstly, the traditional measurement of depth refers to the measured depth of a fin from its base to the tip, C-Drive fins remain relatively similar to other fin types on the market in this regard, but unlike traditional fin types, C-Drive Fins have a second attribute we call Base Depth.  Base Depth is measured at the narrowest point of the base within the Cut-Away section of the design. The Base Depth plays a significant role in the performance of the fin by allowing us to control the amount of "bite" the fin has.

Blending all these aspects together, and more is what makes C-Drive Fins a unique proposition to the surfer looking to advance their skill and enjoyment levels.

So what does it all really mean ?  It means that you will feel a noticeable change in the performance of your board when C-Drive Fins are used in place of a traditional fin application.

What can you expect ?  You can expect to generate more speed. You can also expect to turn tighter in the pocket. Among other things, you can expect to drive through cutbacks like never before while having more stability through critical turns.