The C-Drive concept was born in January 2002 when Dean Cole collaborated with Troy Clutton on a design idea he had for a new surfboard fin.  Sketches were drawn and development of the original design concept began immediately. 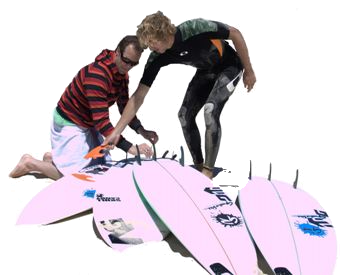 At C-Drive Fins we were determined to create a product that delivered a significant advance in fin performance.  Surfboards have changed dramatically over time and continue to do so.  Apart from the advancement in fin construction methods and composition types, fin design remained relatively unchanged since the ground breaking arrival of the Thruster set up.  At the time of C-Drive’s conception there was a wide selection of fins on the market that were very similar in design but claimed to do very different things.  It was clear from the beginning that in order to create a product that delivered real performance enhancements, we needed to start with something totally different.  The C-Drive concept delivered the impetus we needed.

In February 2002, on Sydney's Northern Beaches, Troy hand foiled the first prototype of what was to become C-DriveFins.  Right from the beginning, in those first few surfs, it became obvious to us that there were significant advantages to be gained through this new fin design.  We felt a discernable difference in the performance characteristics of the fin over anything we had previously used.  It was now up to Troy, the principal developer of C-Drive, along with his development team, to test the limits of the design.  Hundreds of fins later, some with subtle changes and some with dramatic alterations to the original concept were crafted to test the parameters of the design.  Each time we tested and evaluated the performance of every fin we made, learning something new in every process and making changes accordingly.

Early in the development stage it became apparent that our design goal of producing a fin that generated more drive but gave up nothing in the way of manoeuvrability was not only possible, but a little short sighted.  Over time, our R&D process made it increasingly clear that it was possible to create a fin that generated more drive and at the same time was more manoeuvrable.  It was this revelation that was to fuel continued research and development over the ensuing years.

In 2007 we believed we had developed the design to a stage where it was ready for the market.  We approached FCS and they included C-Drive Fins in their product range.  The arrangement between C&C Fin Designs and FCS was terminated in late 2008.

The C-Drive Fin Design has been granted Patent status in Australia and Internationally.

In December 2009, after further development and nearly eight years after we began, C-Drive Fins would be re-released to the surfing public by the surfers who developed and crafted the fin.

Towards the end of 2019 C-Drive Fins has formed a new partnership. I am excited to announce the collaboration with a fantastic company headed by Leif and Jamin of Naked Viking Surf operating via www.surfnvs.com